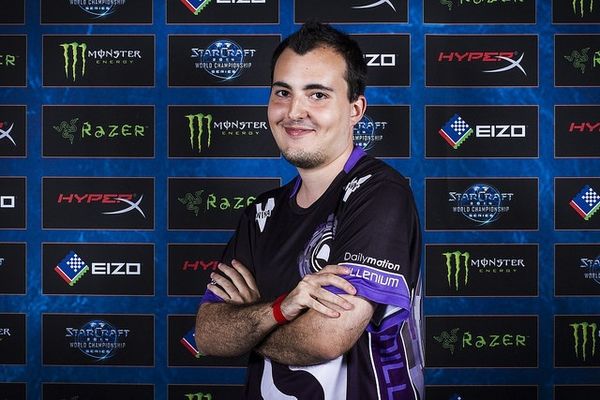 He was active in WarCraft III before StarCraft II and came back to the game with the release of Warcraft III: Reforged. He also played Heroes of the Storm during his break from SC2 in 2015.

He is the younger brother of LucifroN, another Spanish progamer.[1]

VortiX started playing Warcraft III with the Undead race in late 2006. In late 2008, despite being very young, he gained moderate notoriety after finishing second in WCG Spain (losing to his brother LucifroN in the final), winning the ZOTAC Cup #112 3-2 against the Korean player ReminD, and getting signed by x6tence, the biggest Spanish club by that time. During 2009 and early 2010, his online performances in ZOTAC Cups, WC3L and SteelSeries Cups and the qualification for ESWC 2010, BlizzCon regionals 2009 and 2010 gained him notoriety as one of the best European players. His biggest result in a big tournament was a top 5/6 in the Warcraft III BlizzCon European regionals, losing 1-2 to both Grubby and LucifroN.

VortiX switched to StarCraft II with the release of Wings of Liberty in May 2010.[2]

In late 2010, VortiX was signed by the newly created Spanish team Aprender. In early 2011, VortiX won the StarCraft II Spain EPS, making him the first Spanish SC2 champion, even though he would lose the crown a few months later in LVP Season 1 to his brother LucifroN. During the year, and despite being in the top of the Grandmaster league, he only participated to small online events, or local LANs, prioritizing his studies, like his brother.

He erupted at the international scene at The Gathering 2012 in Hamar, Norway. He finished 5th/8th at the tournament after showing a great skill level and being one of the revelation players of the tournament. He went though both group phases, beating 2-1 TitaN in his first match. At the bracket phase, VortiX defeated SjoW by a clear 2-0 and then lost 1-2 to Brat_OK, who made it to the grand final and lost to VortiX’s brother, LucifroN.

From May 26 to May 27, he participated in the 2012 World Championship Series: Spain Nationals. After beating AlaStOr in the loser bracket final, he then lost to his brother LucifroN in the grand finals.

On July 3, 2012, VortiX played in the TSL4 EU/NA #7 Qualifier, where he made it to the finals and defeated Golden 3-0, earning him a spot in TSL4, which would be his first premier event. He defeated BabyKnight in the first round of the event, but then narrowly lost 2 to 3 to KeeN in the round of 16. The same month, he also showed his value in team leagues. VortiX represented his team Karont3 in IPL Team Arena Challenge 3 against Empire, and brought back his team from 0-2 to 5-2, convincingly all-killing Empire’s lineup which included Beastyqt, Kas, and Happy. 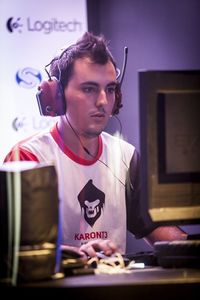 During the summer of 2012, VortiX made multiple podiums, making a name for himself in the StarCraft II scene as one of the best foreigners

At the end of July, he retook his title of Spanish champion to his brother by defeating him in EPS Spain 9, who had defeated him in their three previous encounters. VortiX then decided to focus more on gaming, even though he kept studying at a slower pace. VortiX attended IEM Season VII Global Challenge Cologne, celebrated at GamesCom on August 15-19th, 2012. It was his first premier offline tournament and he amazed the world by reaching the semifinals after going through the group stage and beating 2 South Korean superstars at the playoffs: ForGG, 3-0, and SuperNova, 3-2. He lost to the eventual champion, Mvp, with a 1-3 score.

From 15 to 16 September, Vortix represented Spain while participating in 2012 World Championship Series Europe. He fought his way through the upper bracket all the way to the Winner’s Final beating Noticimus, SortOf, Bly and BabyKnight. Having already secured spot in WCS World Championship, VortiX clashed in Winner’s final with favorite to the championship Stephano losing 0-2. In the loser’s bracket he battled with his brother, LucifroN, winning 2-0. In the Grand Final he sought revenge against Stephano but after winning first match 2-1, he eventually lost 0-2 finishing – like in Spain Nationals – second.

In September, he also played in the first open DreamHack in his homeland (the previous DreamHack Valencia being an invitational). He crushed his first group, and went through his second one thanks to a good map score. In the playoffs he defeated the Korean Zerg viOlet before losing to the Terran one TheStC.

VortiX qualified himself for IEM Season VII Singapore from his placing in the European Qualifiers. Attending the tournament from 22 to 25 November 2012, he would be placed in group A. He would go 3:2 (7-4) on maps and thus managed to qualify for the playoffs. In the playoffs he would once again make it to the semifinals, defeating both Ninja and Revival 3:0. In the semifinals he would face Sting and would lose to the eventual champion 3:2.

From November 17 to November 18, VortiX participated in the Battle.net World Championship. He finished second in his group after losing 1-2 to Vibe in the first series, he then won Comm 2-0 and Vibe 2-0. In the bracket he had to face his brother LucifroN. After winning him 3-2 he lost to the runner-up of the tournament Creator by 2-3. He also entered IPL 5, but couldn’t do better than a 25 to 32 placement, after loss against Caliber in the first round, and DongRaeGu in the loser’s bracket. VortiX kept playing in online tournament, and he notably finished third of the RSL 2. Despite a dominant group stage with a 2 to 0 win against Leenock, he was defeated by Scarlett in the winner’s finals, and by the same Leenock in the loser’s finals.

From December 8 to December 9, VortiX participated in the first edition of the THOR open. He finished first in his group after winning Ourk, PoYo and Snute by 2-0. In the semifinals he had to face the Swedish Protoss Bischu and he won by another 2-0. Finally, he won Snute in the final by 3-0, finishing the tournament undefeated in series and maps, his first gold in a major event His last Wings of Liberty event was IEM Katowice, where he was less successful, as he was eliminated in the group stage, having suffered loss against the three Koreans of his group Daisy, Golden and First.

Heart of the Swarm

Coinciding with the release of Heart of the Swarm, VortiX announced through his team Karont3 that he would be focusing again on studies, even though he didn’t have the intention of fully retiring.[Citation needed] The first HotS event for VortiX was IEM Season VII World Championship, but like in Katowice, he was unable to made it out of the group stage, scoring only one win in the whole group stage against Snute.

After that, he lost his Spanish crown to his brother during EPS Spain 10, his first loss in months against LucifroN. Even though his lack of success in the previous months, VortiX managed to qualify for 2013 WCS Season 1 Europe in May after convincing victories over monchi and Dayshi. He would then go on to lose in the Ro16 against Happy and BabyKnight after a 2-0 win against NaNiWa in the loser match.

On May 30, he and his brother LucifroN left Karont3 e-Sports Club to join mousesports.[3] VortiX then announced that starting in summer vacations he would focus more in gaming, even though he was not quitting studies.

During July 2013, VortiX managed to qualify for 2013 WCS Season 2 Europe Ro16 by winning against both ForGG and Grubby. There, he managed to pull a strong performance and win 2-0 against both MaNa and MC, just before falling to Grubby and NaNiWa in the Ro8, failing to qualify for the Season Finals. He would then go on to perform well in online cups, including a 3-0 record in SC2CL, and a few wins in ZOTAC cups, including ZOTAC Cup Monthly Final June 2013.

On September 5, he managed once again to qualify for 2013 WCS Season 3 Europe Ro16, after 2-0 victories against Noname and ShoWTimE. He went on to become the first player to be in the Ro8 two times in a row, after beating both BabyKnight and ThorZaIN 2-0. In the Ro8, he won against one of the favourites StarDust with a convincing 3-1, meaning he qualified for the global finals in Toronto. Then, as the last foreigner standing, he lost 0-3 vs MMA.

On August 1 and 2, VortiX played in the ASUS ROG Summer 2013 tournament. He first went through the group stage 1, going 3-1 against Bunny, then advancing by beating RunA 3-1 in the winners match. He was, however, knocked out on day 2, in the second group stage, by losing 2-3 to StarDust, then 1-3 to Goswser.

VortiX continued to make waves in 2014, winning the Vasacast Invitational 2014 and then advancing to the 2014 WCS Season 1 Europe after consecutive 2-0 wins over MMA and MVP in the Round of 16. He attributed his success to examining his past replays and making corrections, while casters noted added confidence and decisiveness, with ReDeYe being one of those who dubbed him the Son of Soulkey because of his versatility and his new-found determination to make a plan work. He currently is due to play jjakji in the quarterfinals. Already, though, he has become a contender for the title of Best Foreigner alongside Snute and Scarlett.

After one year spent in mousesports, he decided not to renew his contract and left the team on June 2, 2014.[4] On June 8th, Millenium announced that he joined their team.[5]

VortiX was seen playing Heroes of the Storm on and off since May 2014, even though he still played StarCraft II. Later that year, in the summer, he formed team El NeXo with his brother LucifroN and some other Spanish StarCraft II players such as LoLvsxD and AlaStOr, even though eventually, the roster only maintained VortiX and LucifroN from the StarCraft II scene. On 17 December 2014, it was made official that he would be temporarily retiring from StarCraft II due to lack of motivation and would go on to play Heroes of the Storm professionally.[6] On March 26, 2015, he and the rest of El NeXo were signed by Team Liquid as their Heroes squad.

In an interview in April 2015, he has said it is unlikely for him to go back to StarCraft II, putting an end to some speculations in the Spanish scene that he was playing some StarCraft II again.[7]

On 13 January 2016, despite a very successful year in Heroes of the Storm with multiple gold medals in DreamHacks and WCA Europe, it was confirmed that VortiX was coming back to StarCraft II to play under the Team Liquid flag, citing the fully team-based mechanic as well as the matchmaking as one of the reasons of quitting Heroes.[8] Only two weeks after his official comeback, he managed to qualify for WCS Winter Championship after wins against Happy, ShoWTimE and Bly amongst others. However, soon after that he decided to quit the game again in order to focus on his studies.

With the release of Warcraft III: Reforged in early 2020 he came back to activity, got signed by the spanish growing esports team KPI gaming and has been competing at high level in Warcraft III since then, finishing second in the European finals of 2020’s EPT circuit losing against Happy in the final